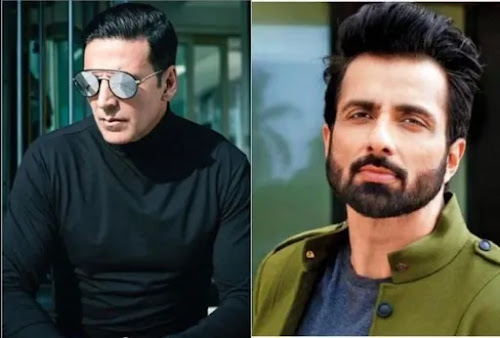 The corona virus crisis is increasing throughout the country.  The government and health workers are working day and night to deal with it.  At the same time, some film stars are also coming forward to help the people facing the corona virus and lockdown.  These include many film stars ranging from actor Sonu Sood to Ayushma , Akshay Kumar and many other .

A user named TEJAS PRATAP SINGH wrote  on his Twitter account @tejaspratapsin7  demanding Bharat Ratna for Akshay Kumar and Sonu Sood, ‘These are the two main people I love so much.  Both of them are also fantastic artists.  In truth, both of them are worthy of Bharat Ratna.  Apart from this,

A user name  B.T wrote, ‘These two heroes really deserve Bharat Ratna’.At the same time, a fan page named Kangana Ranaut wrote, ‘Akshay Kumar and Sonu Sood helped people with heart.  Both of these are worthy of Bharat Ratna.  Apart from this, many other social media users and fans of both these artists have also demanded for Bharat Ratna.  All these posts are becoming increasingly viral on social media.Let us tell you that the lockdown was implemented in the whole country in the last month of March.  During this period, migrant laborers and poor people had to face a lot of difficulties.

Many film stars came forward to help people.  The stars gave millions of crores of rupees as financial help to the PM Care Fund.  While Akshay Kumar gave Rs 25 crore in PM Care Funde, actor Sonu Sood is constantly working to bring the migrant people home at their expense.  With the help of his team, Sonu Sood has reached thousands of people till now.  For this, he is also being praised all over the country.